Woke early and looked outside and it was dumping rain. we agree that we can't ride in it and we go for breakfast at Spud's We had heard from a guy on Browning that the pancakes were huge. He was right but they were not too big for Carl. We returned to the motel and watched a bit of the Tour de France. The rain started to let up by 11:00 so we went back to Spud's for an early lunch and by the time we were finished it was sunny. We headed back to the motel and got packed. We left Chester at 12:30 and started east to Havre. Around 31 km in Carl got his first flat. Good time for a break. We were surrounded by wheat fields today. There were some storm clouds coming in from behind but they seems t o cross over and go north east on highway 2. Around 61 km Francois got a flat. Carl rode on but Trevor and I hung back with Francois. Less than 7 km later Francois tire was gone again. Trevor went ahead to secure a motel and catch up with Carl. That way they can be showered up by the time Francois and I arrive. Again Francois kept his cool under challenging circumstances and we made it to Havre by 5:00. Trevor had secured a room at Super 8 and Carl arrived shortly after as had Carl had a second flat and told Trevor to go on. After showers we went for supper at a Chinese buffet at the mall across the road. After supper we went into the local Big R. Its fascinating walking around american malls. I bought a really ugly pair of shorts that fit me better than the ones I'm currently wearing and a 3rd shirt to wear when doing laundry. I wore a full length warm weather jersey and a pair of cycling shorts around Chester yesterday while we were doing laundry. Big R is kind of like Canadian Tire with guns and cammo. You can get pretty much anything in cammo down here. Back to the motel and catch up with the family. Total flats for the day - 5. 3 for Francois and 2 for Carl. Francois wins :)

It goes with the flows or it gets the hose 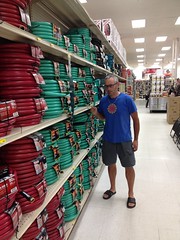 It takes the picture or it gets the hose. 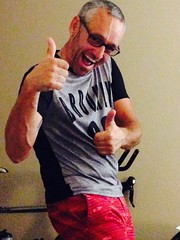 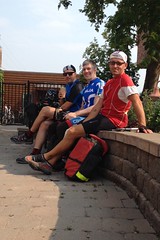 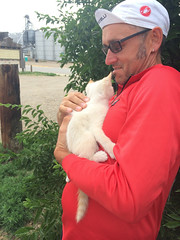 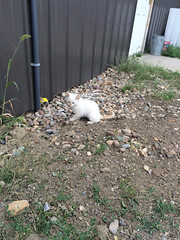 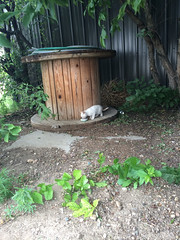 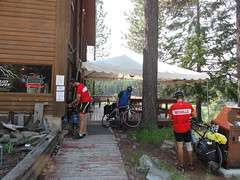 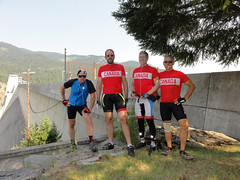 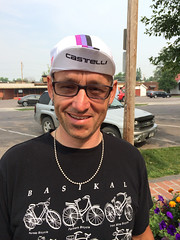 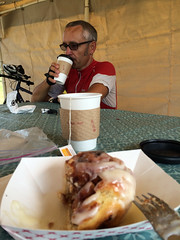 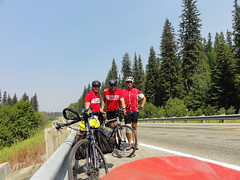 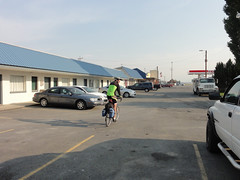