We agreed last night that we would not wake up early because of our ride yesterday. So we got up at 6:45 instead of 6. Wandering over to Subway we noted that wind was going in the "right" direction. We ate, bought supplies and then headed back to the motel. The motel offered a conti breakfast but as the lady at the desk said last night, " coffee, juice and toast 6-10 am" was not going to cut it. Carl experienced some tire tube issues, as in her didn't have any tubes that held air :) so we were a little late in leaving Beach but we were informed that Medora had a bike shop and that it was worth a stop. I'm glad we did. We rode quickly to Medora as the tail wind was significant and found the bike shop with few directions from a shop keeper. Great bike shop, nice staff and reasonable prices. Carl got his tubes, I bought a new tire and exchanged one I bought in Glasgow and Francois was able to get his bike rack repaired. While were waiting for the repair, we walked to a restaurant which was an " all you can eat buffet". Awesome. Broccoli soup, salad, fried rice, pork cutlets, chow mein, dumplings, roast chicken and desserts. The variety was incredible. Not to mention they had chocolate milk on tap, soft serve ice cream and fresh cookies. It was like a dream. A dream come true. We wandered back to the bike shop, stuffed, and when Francois' bike was finished, we headed east on 94. Interesting terrain. Similar to parts of Kamloops and Summerland/Penticton area. We had decided that we would assess our accommodation situation when we arrived in Dickinson. It was our scheduled stop for today but as we rode extra yesterday we thought we might go onto Richardton. Francois made a call to the only motel in Richardton and the lady at the desk said she would not rent one room to four men and we most definitely would not be able too keep the bikes in the room. Numerous jokes were made after about why 4 men were not allowed to stay in one room but I will not put those words on the internet :) So we are kind of stuck in Dickinson for the night. Too far to the next town and the apparent homophobia of the lady at the Ray Bern Motel in Richardton has made us make this a shorter day than expected. It goes with the flows or it gets the hose.

Half day in North Dakota 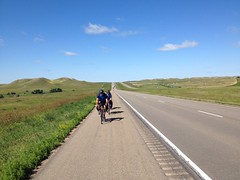 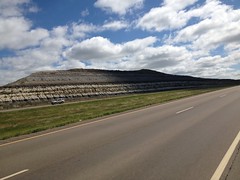 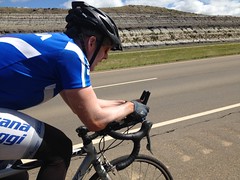 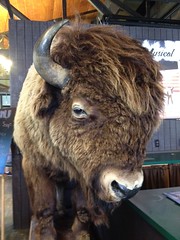 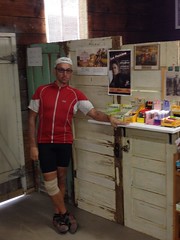 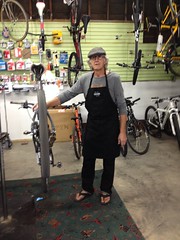 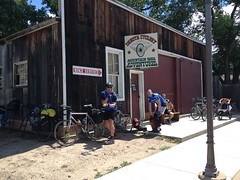 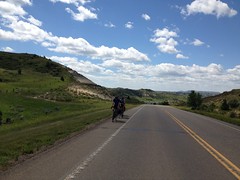 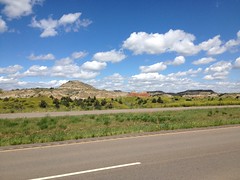 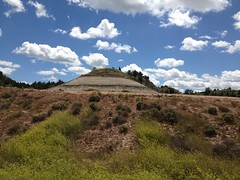 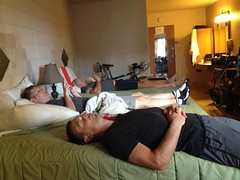 What we do when not riding. 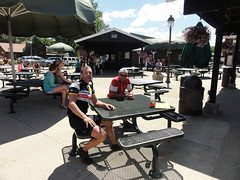 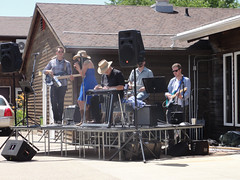