This morning we found that we were in for a day of rain. We had our contie and hit the road at 7:30. We took back roads for the majority of the day and at the 25 km mark we got the rain. We donned our rain gear got on with it. We took our first break in Warren OH and met Sonny, Leslie and James. They chatted us up and were impressed with our trip. We got a picture with them and hit the road again in the rain. The first 120 kms were not so bad but as we tired we lagged and realized that we had not eaten much. We pulled into a appliance store and used its canopy for shelter while we ate our muffin from this mornings contie. We were following Google maps again and at one point we took a wrong turn. I usually check after we make a turn as we have been through this many times. We went back and took the other option and again it was the wrong way. We again returned to the intersection in question and saw a gravel road. We thought there was no way Google would send us down that road but we went towards it and sure enough if was the road. It was a little strange going off perfectly paved roads to follow gravel but we had no other option as we had no idea where we were. We have come to rely on the phone map so much, if it were to falter I'm not sure what we would do. As we road down this gravel road thoughts of deliverance and banjos went through our heads but within 2 kms it turned to pavement and led us to a main road. We pulled into Franklin around 5:30 and got a room at the Comfort Inn-Non executive suites. We did laundry, dried our gear and had the worst lasagna we've ever had. It tasted good but it had no cheese on top and it wasn't baked. Let down. We have made it back to Francois' ride with GPS route now so it gives us a better idea of elevation. Today we had a lot of hills up and down. At least not we will have an idea before hand.

Headwind with a big helping of rain 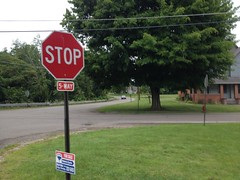 I've only seen a 5 way stop once before. Lacombe AB. This one is in Alliance OH 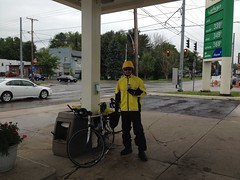 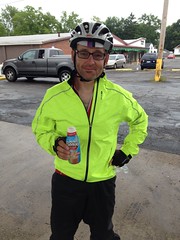 Bolze thought I looked funny with my chest hair showing. 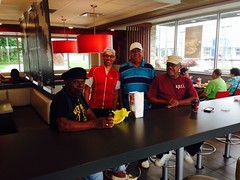 We met James, Sonnie & Leslie at MCD's for a rain/lunch break. 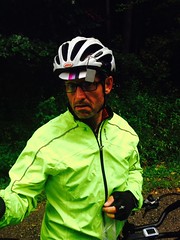 I'm not sure what I'm doing but it seems serious. 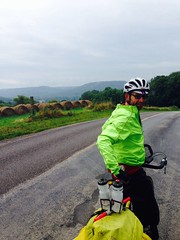