Monster ride with monster heat made us monster hungry. As we left Concrete we realized that we had not actually seen the town. We saw the beginnings of the town but were actually about a mile out of town. As we rode through, it looked like a nice little place. Maybe next time. We rode to a place called Marble Mount- The Gateway to the American Alps, or so the sign said. We were told that we would have a last chance at services at a place called New Halem. Had a rest there and then started the climb. It was quite spectacular scenery with melting snow and glacier like remnants of what appear to be avalanche leftovers. The road is typically closed in the winter and I can see why. Wonderful water falls were common at the side of the road and we cooled ourselves in them as the heat of the day started to get under our skin. At one rest stop there was a motor home also pulled over. "Terry" came out and asked if we would like any fresh cold raspberries. Would we? Yes please. She was very nice and asked all the regular questions. Where are you from and where are you going? After the refreshing snack I asked if it would be alright of we filled our water bottles. Of course she could. Then we were off again. As we approached the first summit, we were passed by Todd, who was riding to Winthrop also ( no panniers), We chatted and he later took our picture at the summit. He recommended that we go to Hwy 20 Pizza when we got to Winthrop. He also told us to stop in at a little place called Mazama just before Winthrop. It was neat. Maybe a little granola-ie? Winthrop was not at all what I thought it would be. Imagine western theme town. Lots of tourists. Almost no available rooms. Almost. A really nice lady at one of the places we tried, phoned around and found us a room at the Cascade Inn just out of town and it just happened to be walking distance to Hwy 20 Pizza. Met some folks from Kelowna at a convenience store on the way back from pizza. Everyone is nice. 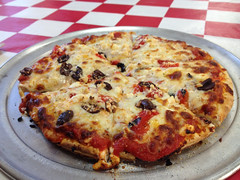 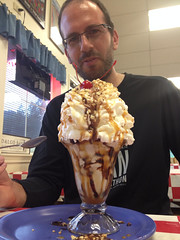 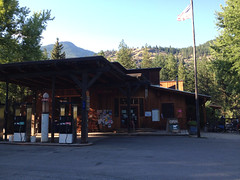 Todd Also told us to go to this cool little town called Mazama. It was cool... And little.